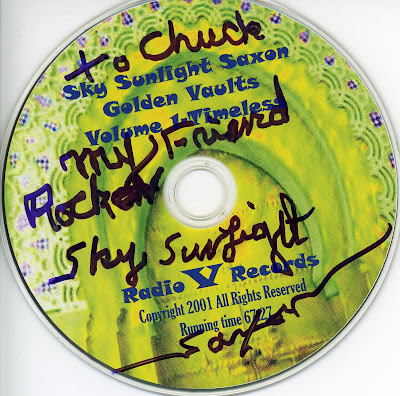 Sky Saxon, leader of Los Angeles 1960s garage-rock band the Seeds, died early Thursday morning in Austin, Texas. Born Richard Marsh, Saxon was hospitalized on Monday...for an undetermined internal infection and was reported to be in critical condition. A statement released last night revealed that Saxon ultimately died of heart and kidney failure due to the infection.

Sky and I weren't "bosom buddies" by any stretch of the imagination, but I did get to meet him once, and interview him, when the reformed Seeds toured with original guitarist Jan Savage. Sky was vibrant, full of life and one of the nicest, most genuine people I have ever met. I was really sad to hear of his passing, which fell on the same day that Farah Fawcett and Michael Jackson both died.

Here is the article/interview I wrote for The New York Waste. It was probably published in the summer issue of 2003. (I don't know for sure because they never sent me a copy.)

The Two Felipes - Rock the Boat

I know I said that the Pyroclastix live tape would be the final entry of the live series for the week, but I have this ready and I feel like giving you a bonus. Think of it as the unwanted sequel to your favorite horror flicks, only way, way cooler.

Quite honestly, I'm not sure if I have the title of the tape right. Ack burned it for me from stuff that vocalist Dan Vebber gave him, and Ack labeled it as Live as the Dickens! In the jumble of Two Felipes scans he sent me, though, there was this tape cover that didn't seem to fit anything else Felipe-related, so I'm using it here. If I'm wrong, sorry - perhaps Dan can correct me.

In any case, this is a vintage live Felipes recording made between Eat Your Fill and Beaker Full of Death, so it's probably from around 1987 (as the tape insert indicates). I think the club was called The Unicorn, which was most likely in Milwaukee, WI. It must have been a soundboard recording because it's pretty clear.

The setlist mostly contains songs from Eat Your Fill, though "Door to Door Shoeshines from Beaker Full of Death is here, as well as covers of "Iron Man" and "La Cucaracha." No, I'm not kidding - download the tape!

The images and music were uploaded with Dan Vebber's full consent. Thank you, Dan!

According to Dan Vebber:

"Yeah, "Rock the Boat" was our proposed "next" album that never materialized. (We generally worked backwards, album concept/artwork first, music second, hence the tape cover.) And I think we had actually decided to call it "Hot Glue Gun" by then, so the artwork I did wouldn't have worked.
That Unicorn show was pretty awful. I think there were like, two people in the audience."

So that solves the mystery of the tape cover.

As for the show, there may not be many people in the audience, but it's a damn good document of The Two Felipes during their existence, regardless. Leave a comment and tell us what you think, Felipe Fanatics! 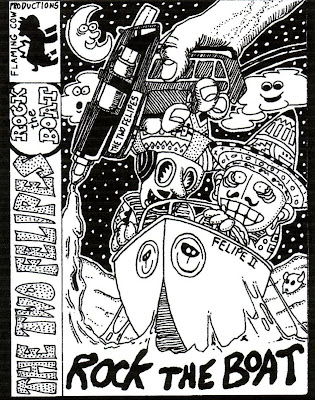 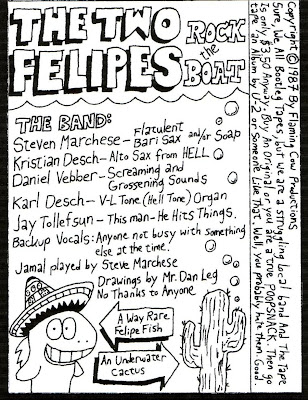 Download Rock the Boat as a .zip file!
Or try out some sample tracks first: 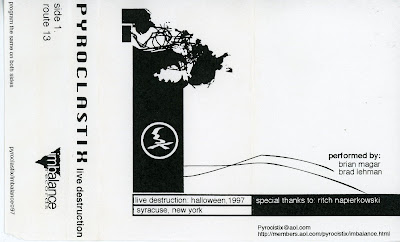 And now for the final installment in my trilogy of live posts this week.

Pyroclastix were a whole other animal live than on the "studio" recordings. It's just as intense, but a lot creepier with a lot of screaming and an eerie, empty feel to the overall sound. This is the last Pyroclastix release I have and it's definitely a high note in noise-master Brian Magar's catalog.

It's only one track that's just over 26 minutes.

The images and music were uploaded with Brian Magar's full consent. Thank you, Brian! 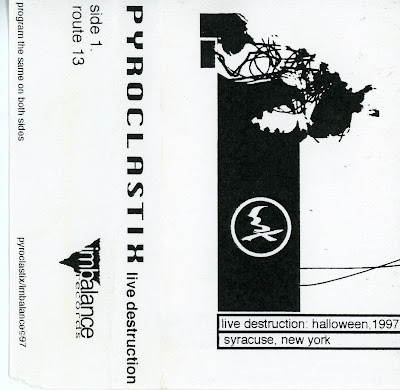 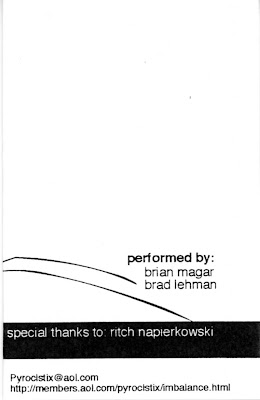 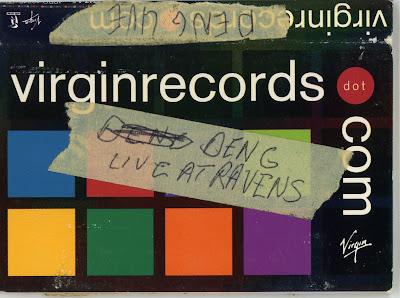 deng didn't last long, but we were around long enough to put out one tape (that got good reviews in Flipside) and we played one noise show at The Raven Playhouse with Eckankore, Musicide and possibly Flammable Child(?).

This is that show, as recorded on my 4-track as we performed. It's pretty chaotic, but it's a lot of fun and it's only nine and a half minutes. 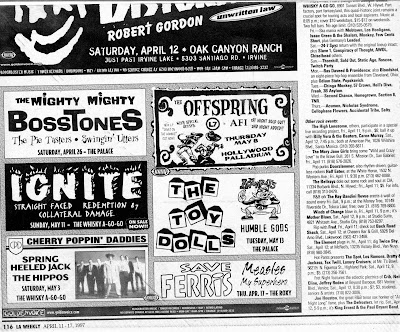 (Twitch Party's listing in the LA Weekly)
And now for the first in a trilogy of live recordings that I'll be posting this week.

This was Twitch Party's third or fourth show and you can hear a lot of diversity in the songs. We were in the process of assimilating our many different influences whole, which we eventually fully realized on our demo, but listening back on this recording, I'm pleased with the diversity. At least we were original.

This show is marked by my constantly cracking voice, JC's ever-troubling hit-hat and our general shyness when it came to dealing with the audience. Actually, Aidan does the best job trying to keep people entertained. I hid behind sunglasses and a dog collar and had a hard time talking to the crowd. I was 18 and thus not of legal drinking age, so I was probably pretty sober, maybe a little stoned.

Travis sat in a chair while he played - he thought it was funny.

There's a video of this show, too. 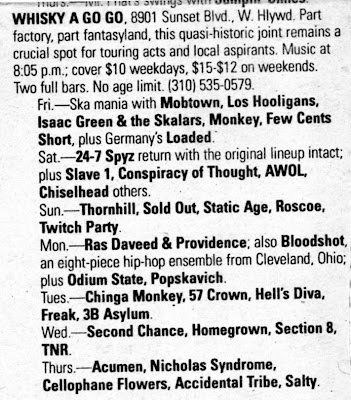 02. Crack - As far as I'm concerned, this was the first Twitch Party song. I wrote the lyrics in my college Intro to Philosophy class and gave then to Aidan. He called me with a riff. When he played it for me over the phone, it sounded good. While practicing at JC's house, I beat on the cow bell while screaming the "I stepped on a crack to break your back" and it stuck. The lyrics were very influenced by San Francisco's Bomb.

03. Sore - This was really Aidan's song and I don't know much about what was behind it. I remember getting really sick of this song after a while, but now it's one of my favorites.

04. Urinal - On my way back to LA from NY, I went into the bathroom and peed next to a guy who was beating off into his urinal while giving me a creepy grin. I wrote lyrics about it and Aidan came up with the music.

05. Stench - This was a silly song. I wrote lyrics about a brutal murder scene and the band came up with something that sounds like L7 on testosterone. I still like it, though.

06. Beautifully Deformed - The music for this one came from one of Aidan's 4-track recordings. It was originally called "The Poop Song" and the lyrics were of the "I want to poop on you, I want to poop on everyone" variety. Aidan asked me to write something else, so I came up with the Bomb-infused sex lyrics.

07. Binding Glory - I wrote this one. I borrowed an atonal chord from Six Finger Satellite and arranged it around S&M lyrics. It came out well, especially after Aidan, Travis and JC added their flourishes.

08. Football Jock - Another song that came from Aidan's 4-track recordings. JC and Travis did an excellent job of recreating the metronomic, robotic beat.

09. Song - One of my songs that we played until we broke up. It was properly recorded for the demo.

10. The Taxidermy of Love - If I remember correctly, the music came from one of Aidan's 4-track recordings and I provided a poem I wrote as lyrics.

11. Grassed - I took the title from the Naked Lunch glossary and wrote a song around it. Aidan came up with the music. I particularly like the Sword of Vermillion-like guitar riff.

12. Halved - Another case of Aidan setting my lyrics to music. Travis insisted that he couldn't play that fast, so he played the note slowly and it ended up sounding really cool. The song kinda reminds me of "Rope" by The Jesus Lizard.

13. Stretched - One of our first songs and one that remained in our set until we broke up. I love this song. 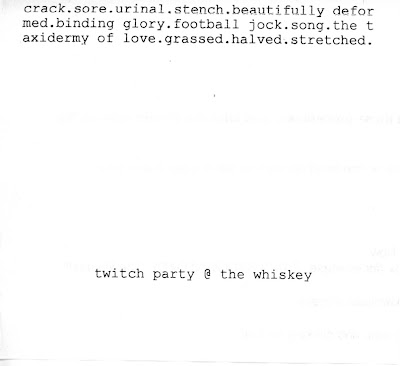 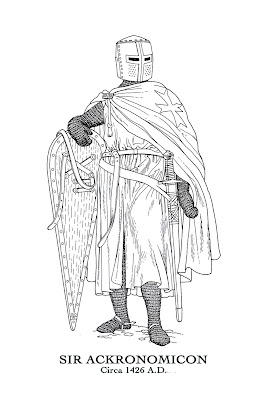 This is the Third Book of Pope Goat VII, and, at this point, Ack and I were comfortable with the roles of Sir Ackronomicon and Sir Billy the Phreek, which His Holiness Pope Goat VII handed down to us. It's a brutal onslaught from beginning to end, with some parts bordering on power-violence (that Sleestak influence coming through). The first song, "Fucking Piece of Shit Bitch," sets the bar, and the book continues down that path.

These psalms truly were the most extreme measures His Holiness the Pope Goat ever had to take! 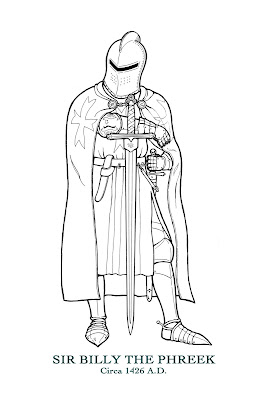 01. Fucking Piece of Shit Bitch - This woman kept calling and asking for "Ira" while we were recording, which, of course, made the Pope Goat very angry. When I insisted for the third time that there was no "Ira" and that she had the wrong number, she got indignant and the Pope Goat waged war. The Pope Goat won.

02. Headshots - Sir Ackronomicon was in the process of making a student film, and he had piles and piles of headshots from wannabe actors looking to get their big break from Dramalogue. We ran around the living room recording studio in my mom's house throwing the headshots in the air and screaming at them. It was a huge mess.

03. Just Dogs - I'm not sure if this was about my dog, Lady Cookie the Wookie (RIP - she's guarding Pope Goat VII at his throne now) or if it's about these asshole dogs next door that always barked at us. I think it was the latter. Fucking piece of shit dogs.
04. Micro Phones - A lot of our equipment was/is budget crap from Radio Shack, and, as to be expected, it breaks. I knew Sir Ackronomicon was a worthy warrrior when I saw the look on his face as he glared maniacly at a broken microphone and screamed, "Look at you, you fucking piece of shit microphone!"
05. Chicken in a Biscuit - Yes, it's about the cracker, but His Holiness Pope Goat VII didn't want to worry about trademark infringement, so we spelled it differently. "I think I'm gonna risk it for chicken in a biscuit!" How about you?

06. 1492 - This evil track is a brutal assualt on American society going all the way back to Christopher Columbus. It's the soundtrack to the Pope Goat destroying 500 years of culture.

08. 27 in 1 - This was the first time we recorded music and vocals together and it was a real turning point in the way the Pope Goat channeled his music and message through us. It was also recorded under the influence of mushrooms. Either later that night or listening to it the next day, Sir Ackronomicon said it sounded like 27 songs in one, hence the name.

09. Doughnuts (Remix) - A dub-style remix of "Doughnuts" from Book of the Headless Goat.

10. Decapitation (Remix) - Another dub-style remix of a track from Book of the Headless Goat. The remix was something we meant to pursue, but the Pope Goat doverted out attention into other areas. 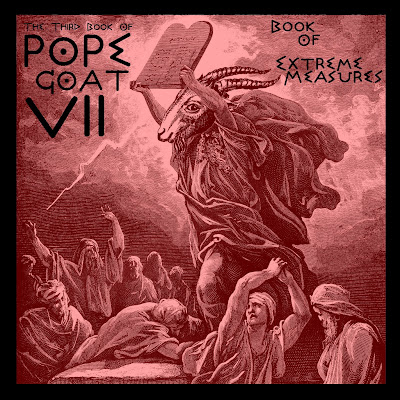 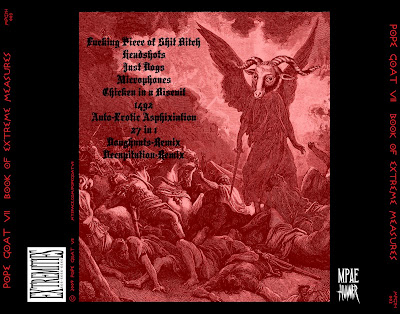 note: the .zip file includes booklet and tray-card inserts so you can make your own PG7 CD!