MPAE has been many things over the years. It started as a crappy zeroxed zine ("circulation of only 20") that I'd try to sell to freshmen and sophmores for a quarter. In my strict Catholic prep school, distributing something like that could have landed me a suspension. I saw it as a more intelletual rebellion than walking around with my shirt untucked, which would get you a detention. Besides, that was the preferred rebellion of the popular people.

My mom got me a Fostex XR-11 four-track for a graduation present and I spent the following summer holed up in my grandmother's house on Long Island recording a punk album, among other things. I actually lugged all my equipment from LA to NY, and I'm glad I did. It kept me sane.

I was listening to a lot of Crass and FYP at the time, and I think it shows in the songs, although there are elements of all the punk and hardcore I had absorbed up to that point, especially The Angry Samoans and Circle Jerks, who were the first two punk bands I ever bought. You'll notice a lack of bass. I didn't own one at the time. My uncle lent me one, but I wanted two guitars (like Crass) and I didn't feel like doing the slightly more complicated engineering involved in getting the bass bounced onto one of the four tracks. Instead, I recorded one guitar as all treble and the other as all bass. Hey, I was 17. I've toyed with the idea of going back and putting bass in these songs, but it's usually bad news when people mess with their old music. What do you think?

After this, MPAE became a homerun mailorder punk catalog, and then a cassette-only noise label (look for those releases here in the future). Eventually, it became my defacto label name for my CDR releases (look for those here, too) and now it's this blog. I wonder what it'll be in another ten years.

01. Thinking - Before I learned how to play guitar, I used to write notebooks of lyrics while bored in class. I think this was the first song that I successfully converted to fit with the music in my head after I discovered the magical bar chord.
02. The Boy's Amibition - The title was suggested by a friend who said I should write lyrics based on titles he liked from short stories in our Literature text books. There's a heavy influence from Conflict and Bad Religion here. I actually did two vocal tracks to get that Conflict sound. Fancy!

03. No Friends - This is the first song I ever wrote when I was first learning how to play guitar, swiped from Eater's "No Brains." Some of my favorite lyrics.

04. The Goat Song - My high school offered an "Intro to Guitar" class, so I'd have an acoustic guitar with me every other day. One day at lunch, I spontaneously came up with this awful riff that I thought sounded like Radiohead (I still don't like them) and my friend, Little Squirrel, started singing about fucking a goat. Thus, "The Goat Song" was born. This was recorded in LA with him doing the vocals. I later recorded a much better version.
05. All Dumb - A lot of these songs were written on the spot. I'd quickly pull a song out of my ass, record the music, go in the next room and scrawl lyrics about how much I hated everybody. Thanks FYP!

08. I Really Hate You - One of my better FYP bursts, I think. This was later re-recorded for the FPOS album that I'll post at some point.

11. Fucking Awful - A brief foray into pop punk inspired by, you guessed it, FYP. Thankfully, it didn't last long.

12. Blah Blah Blah - This is basically what bands like The Exploited, GBH and Discharge sound like to me.

13. Let's Get Optimistic - Lyrics written by my best friend in high school, Earl LeMay. I actually performed this at a school talent show with some edits to the more colorful lyrics, but got disqualified because the teacher who organized the night hadn't bothered to read the lyrics I gave her and some parents got offended. She claimed that I sang different lyrics than what I gave her, which was an outright lie. I hated that school.

14. The Search - Can you detect some Bad Religion here?

15. All You People Should Die - Something I used to sing to everyone in the cafeteria at lunch time.

16. AWOL - Lots of Fugazi with a little bit of Sonic Youth. And there's a bass!

17. No Way Out - My attempt at doing a political version of The Derelicts, who are still one of my favorite punk bands ever.

18. Hahaha - Definitely influenced by FYP, but with more thought put into it. I always liked this one.

21. NRA Song - Lyrics given to me by Little Squirrel. I don't think he really liked what I did with them, but he played this whole tape on the dorm cafeteria radio station at Columbia University, along with The Two Felipes. I went to visit him and I actually had fans!

24. It Could Have Been Me - Written after I busted two tires and the oil pan on the car my mom was borrowing from my uncle while we were in NY. Mudhoney influence.

25. Burn Down Your School - This was my number one favorite song that I had written up to this point. I later re-recorded it for FPOS, and I think that version's a lot better.

26. Kill Your TV - Written around the same time as "Burn Down Your School." Also re-recorded for FPOS.

27. X-5 - I think the was the second thing I ever recorded on my four track. It was based on a joke I had with some friends in my Earth Science and Astronomy class. The teacher would disappear into his ham radio closet and Earl LeMay said, "He's talking to the aliens from Xaxxon 5." It gave me a chance to play with the pitch control on my four track.

28. Fucking Awful (Alternate Version) - I don't know why I did two versions of this song, but I did. This one has a different guitar solo.

29. All You People Should Die (Reprise) - The first time I recorded this, the tape ran out, so I tacked it on at the end.

30. The Goat Song 97 - This is the definitive version with bass and everything! Sounds more like Flipper for some reason. I actually performed this song at an open mic night once and people remembered me for it: "You're that guy who did the song about the goat." Yes I am! 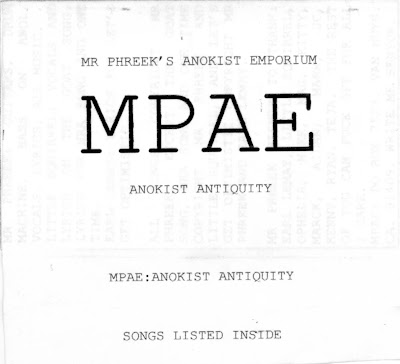 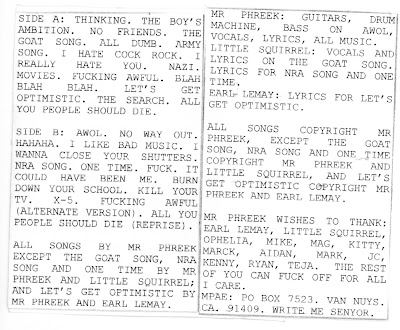