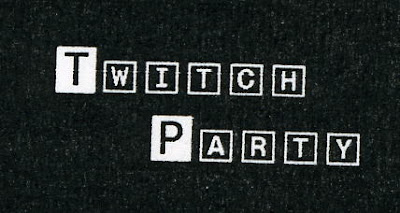 My first band. I did vocals, Aidan Flax-Clark was the guitarist, Travis Erwin played bass and JC Ehle was the masterful drummer. We formed in the fall after I graduated high school. I was the oldest, at 17, and in my first year of college, but I had made friends with Aidan, who was a sophomore at my old high school, and we kept in touch over the summer. We had several interesting experiences when I got back from NY and decided to form a band on our shared love of The Jesus Lizard, Slug, Tool's Aenima, The Stooges and old punk rock.

Aidan was already good friends with JC, who I kind of knew from high school. We had been in some music classes together and I knew he was an excellent drummer. (Little did I know how amazing he really was.) Originally, we had a mutual friend, Mark on bass, but he wasn't that great of a player and, in a band where the guitarist and the drummer were both virtuosos, that mattered a lot. So Aidan brought in his friend, Travis, who proved not only to be an excellent bass player, but a real asset to the Twitch Party sound.

I was into The Jesus Lizard, Six Finger Satellite, Slug and old hardcore, while Aidan loved all of those, but added Tool and Pink Floyd to the list. Travis was into "alternative" rock, like REM, Nirvana, The Foo Fighters, The Pixies, stuff like that. JC loved Coal Chamber and other Nu Metal bands, but also shared my appreciation of straightedge hardcore bands like Earth Crisis. Somehow, we all spoke a common musical language.

We played a few shows at places like The Whiskey-a-Go-Go, Cobalt Cafe, Raven Playhouse and even Al's Bar. Our first show, ever, at Cobalt was a complete disaster. We were relentlessly heckled by the "punk" crowd who went so far as to unplug Aidan's amp, throw a full cup of water at Travis and cover the stage with balled-up LA Weeklys. (Aidan and I renounced punk after this show.) At an odd show at some Rec Center in the Glendale valleys, the sound guy, Mike, said he wanted to record us, saying we reminded him of Flipper, which was a huge complement to me. Thus, we recorded this "official" demo. (Mike has since gone on to record bands like 400 Blows.)

Eventually, our singular vision splintered, due to egos and asshole behavior, most of which was mine. I got into Karp and back into old punk and hardcore with The Germs, while the other guys were going in what I saw as an Emo direction. Aidan didn't like the guitar riffs I suggested and I didn't like where his ideas were taking the group. In hindsight, there was room for compromise, especially on my end, but at 19, I didn't see that, and basically bailed in favor of another band who brought me on as vocalist called Leopold (who will be posted here, hopefully).

The real end came when JC moved to Santa Barbara to go to school. He said he'd come back to the San Fernando Valley to practice, but it was such a hike for him, it didn't happen very often. Besides, like I said, we'd gone our separate ways musically and mutually decided to call it quits. Aidan remained friends for a while, but cut things off after I had severe drug problems and he hasn't responded to me since then, which really bums me out because I really valued our friendship and his talent. Travis and I have kept in touch through the years and it's always good to hear from him. JC and I were never close. I think he thought I was a stuck-up, weird asshole, and he was probably right. I totally respect him as a musician, though, and I wish I could have gotten over myself enough to have had a real conversation with him.

I'm really proud of this band and the music we made. I have some live recordings and rehearsal tapes laying around with songs that didn't get recorded properly, so if you like what your hear here, leave a comment and I'll post some of that stuff. 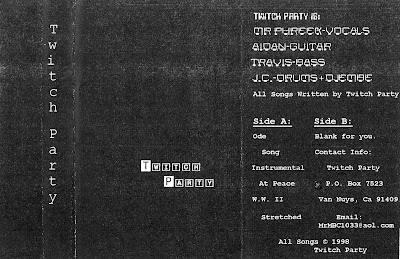 01. Ode - Aidan wrote this one. It really showed the direction he was going musically. I remember practicing this song and JC saying he loved the way I did the vocals, which meant a lot because I thought he couldn't hear me most of the time.

02. Song - I wrote this on my mom's acoustic guitar during a brief winter visit to NY. Aidan immediately latched onto it and beefed it up, and with the virtuoso drums from JC and excellent bass playing from Travis, it really became something. One of our earliest songs.

03. Instrumental - This was where we really started to split. Travis came up with the riff, Aidan moved to drums, JC played an African drum called a Djembe and I switched to guitar. These kinds of changes in bands always annoyed me (and still do), so I wasn't happy to play this one out - I think I wanted to keep it as a studio recording. I was uncomfortable with my guitar playing at this point and really didn't want to be put in the spotlight with the six-strings, so I tried to avoid this song. In hindsight, seeing where the others were going with the music, I really should have stuck it out, but hindsight is 20/20, as the cliche goes, and I really didn't appreciate the band for who and what we were.

04. At Peace - Travis came up with the bass line and Aidan and JC linked right in. I added lyrics and this quickly became one of my favorite TP songs. After hearing this recording, Aidan wanted me to play guitar in the band, but, again, I wasn't comfortable with my guitar playing, so I fought against it, which, again, was a mistake. I should have listened to them, but I wanted to be Iggy Pop/David Yow/Darby Crash, so instruments would only get in the way. They were right, though; they really were.

05. WWII - Our friend, Earl LeMay, from the MPAE recordings, came up with the title for this song. This was another case of Travis playing something at practice and the rest of us following through on it. To me, this is what we were - heavy, emotional, loud and unforgiving. I still love this song and the time in my life that it represents.

06. Stretched - Another one of our earliest songs. I remember Aidan doing feedback during practice and JC doing the cymbal thing that was so perfectly Slug. Then the song kicked in and Travis did his thing while I used an old poem that just magically fit for lyrics. This song gives me chills to this day. Unfortunately, where the other guys were more geared toward "Instrumental," I was more into "WWII" and this song. Again, in hindsight, there certainly could have been a balance, but, try telling that to a couple of teenagers and see where it gets you. 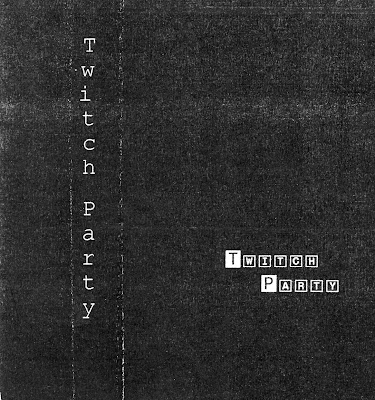 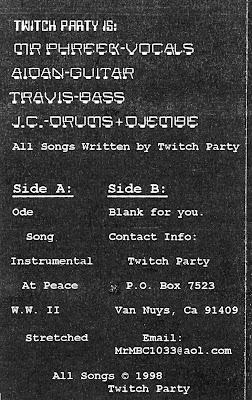 Download Twitch Party as a .zip file!
Posted by Mr Phreek at 6:06 PM