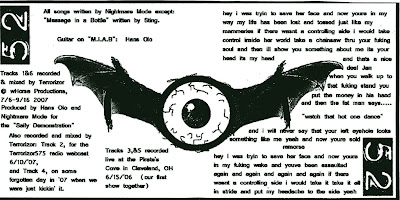 I first met Nightmare Mode in October of 2007. My band, Ultrabastard!, took a trip to Cleveland, OH to meet up with Libyan Hit Squad for a show that, we hoped, would be a showcase of sorts for Tom at Dead Beat Records. He pointed us to his friend's venue, Now That's Class, and said he'd try to make it down. He didn't show, but Nightmare Mode opened.

At first, we were worried that Nightmare Mode would totally suck. They were very nice people, but when you see a band that looks like them on Long Island, it means you're in for some really shitty three-chord Oi-infused punk crap, and when you see bands who look like them in NYC, it means boring, generic crust thrash. Boy were we wrong! We were in Ohio, after all...

Nightmare Mode blend '80s hardcore with metal and grindcore, like Damaged-era Black Flag crossed with early Carcass. Check out the odd time signatures laid down by Nikki Nightmare - she's one of the best drummers I've ever seen in my life! Bassist Danny Desolation lays down heavy grooves, or, in the case of "The Slow One," he plays his four-string like a lead guitar. He also provides the alternating vocals. Ammo wails like a crazed, cracked-out maniac and provides the awesome six-string riffage.

My jaw dropped as I watched them - seeing this band made up for the flaking Dead Beat. After they played, and I got to tell him how amazing they are and Ammo gave me this CDR. They've evolved a lot since this was recorded, but it's a damn good start. (Actually, now they kinda remind me of the early Bad Acid Trip 7"EPs.) Amid the manic hardcore, there's a really odd, almost straight cover of The Police's "Message in a Bottle."

Nightmare Mode are one of the most original bands I've ever had the pleasure of sharing a stage with. They tour a lot, too, so be sure to check 'em out when they come to your town and buy their Sally CD! It rocks!

The images and music were uploaded with Ammo's consent. Thank you, Ammo! 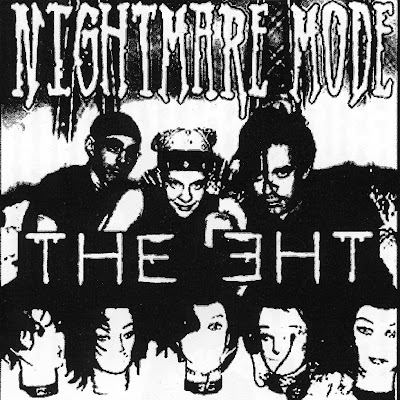 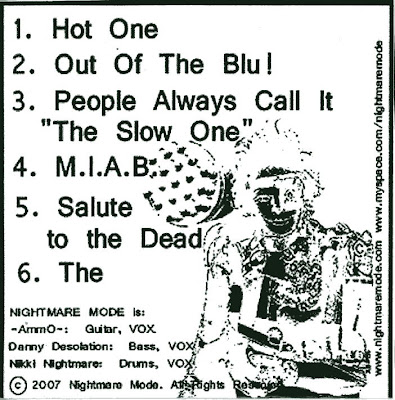