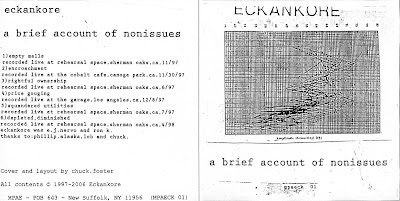 My first exposure to Eckankore came at a noise show at The Raven Playhouse in North Hollywood. deng were on the bill, as well as Musicide and Flammable Child. It was an odd night. The kid from the TV show 3rd Rock from the Sun, Joseph Gordon-Levitt, had a lousy alternative rock band that played before the noise show. All us noiseheads were going nuts waiting for his set to be over.

When Eckankore finally took the stage, there were two guys with briefcases, Ed Nervo (formerly of NYC's Final Solution) and Ron K., standing in front of a film screen that showed an odd, outdated psychology instructional film provided by Emerson Balla. It was altogether a very strange performance and I honestly didn't quite know what to make of it.

Some time later, I ran into Ron and Ed at Green Hell, the record store on Ventura Blvd where Mike Thrashead of Musicide worked. We talked for a bit and I found them entertainingly odd as people.

Still more time later, I went to a psychedelic rock show at The Chorus Club in Korean Town to see 4 Skulls, Farflung and Bardo Pond and Ron was there. We spent the night talking between the bands' sets and I think we finally exchanged phone numbers there. Ron has been one of my closest friends ever since.

When I was in Leopold, we played at the now defunct PCH Club and Caveat Emptor, another Ed Nervo noise project, opened.

Around 2000/2001, Ed took a break from Eckankore and I joined Ron in his noise endeavors. I'll document that period in future posts.

A Brief Account of Nonissues became the first CDR on MPAE. It documents the "classic" Eckankore lineup of Ron and Ed at their very best.

The images and music were uploaded with Ron K.'s full consent. Thank you, Ron!

Some notes about the songs by Ron K.:
(songs that are linked can be downloaded as samples)

01. Empty Malls - This is my favorite track that Eckankore ever did. The structure is very simple - me: a sample played on my Yamaha SU10, fed through an Electro-Harmonix Memory Man and some MXR pedals; Ed: high-pitched noises on his little oscillator. The mood is hypnotic, and the track is perfectly named: it really does sound like an empty mall, with trash strewn about and homeless people living in dark, cavernous corners.

02. Encroachment - This one was recorded live at the Cobalt Café in Canoga Park, CA. One thing you don’t get by just listening to the recording is the visual contributions of Emerson Balla. He is a very strange, utterly unique individual who was born in Brazil and collected found and discarded films from all over the place. For live performances he would bring several projectors and loop everything while the sound was occurring. Other times (like the one here) he would just show some bizarre, dated education film from the 70’s. As you can hear, we would let Emerson start things off and we would ‘accompany’ what he was projecting. As far as sound goes, I can tell that I was using the MXR Phase pedal, and Ed was doing some manipulating with the oscillator. I always used a Crate amp set to low-end only.

03. Rightful Ownership - This was another recording (like ‘Empty Malls’) that was recorded in Ed’s living room in Sherman Oaks. This one is like ‘Empty Malls’ in that there is much looped repetition and an empty, hollow empty atmosphere. It almost sounds like a dying motor from a lawnmower is playing in the background, but it isn’t.

04. Price Gouging - This was a wild, memorable show at The Garage, a long-closed club in a dodgy area of East Hollywood/Mid-Wilshire. I say wild because the crowd was there to see the singer from Fishbone and they were not prepared to experience something like Eckankore. They were already blind drunk, and when we started, they went apeshit. I wish that we had done more shows like this. As for the sound, Emerson was showing the same film that he showed at the Cobalt. Just for the heck of it, I kicked my amp off the stage when it was all finished.

05. Squandered Utilities - Another living room recording. I think it becomes interesting toward the middle. There is some sort of interference going on, kind of unsteady and troubling.

06. Depleted, diminished - Living room noise again. It is a perfect title again - things sound all washed up and finished, like a mouse that has been flushed down the toilet. I like the way that Ed comes in at the three-minute mark. An eerie old self-help tape can be heard in the last minute and a half. 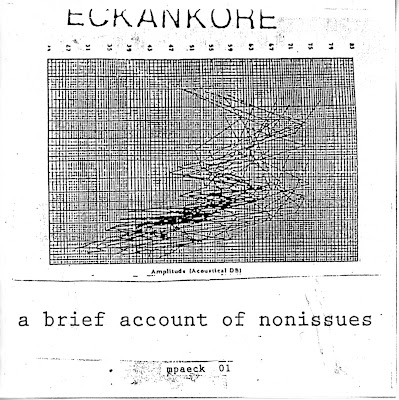 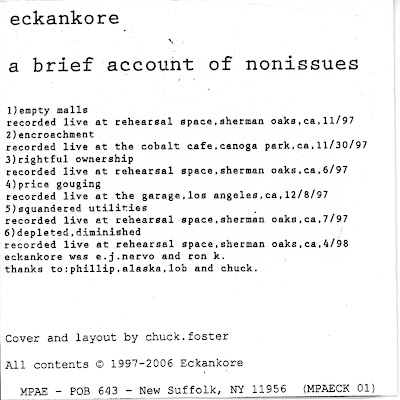