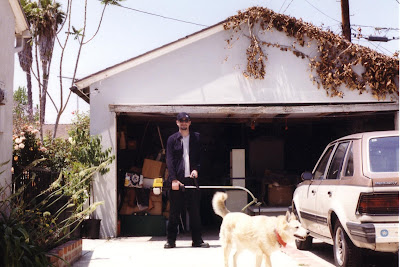 Here are some recordings made during a night of jamming with some friends, circa '98. John Huntley is drumming, Micah Calabrese is on bass and I'm playing guitar. The recording is surprisingly clear for something that was recorded on a boombox in a garage.
I originally met John at a coffee house in Northridge called Common Grounds. We quickly became close friends and I spent many many nights crashing at the huge house he shared with four other guys.

Micah was the drummer of a local band called Radio 4 (not the band that would later gain radio airplay). He was, and I imagine still is, a masterful musician.

After this jam session, John, Micah and I decided to continue the project. We brought in Aidan, from Twitch Party, to play second guitar and Ackronomicon to play second bass. We played live a couple of times, then it started to lose its charm. It quickly became an "anything goes" free-for-all with random people jumping in at practices that really had nothing to do with the band. Plus, the music was going in a really wimpy indie-rock/Stereolab direction that I thought lacked the edge we originally had. Too many cooks and all. Eventually, it just kind of dissolved.

01. Track 1 - Our first jam of the night. John and I bonded over our shared love of Joy Division and it really shows here. Towards the end, I started quoting "Walls" by Crass on my guitar.

02. Track 2 - This was all centered around Micah's phenomenal bass lines. Apparently, this was a song he had fully written that he randomly decided to pull out here. This was my favorite Gardeners track.

03. Track 3 - You can tell the night was winding down, as this goes all over the place. I think that at one point, Micah switches from bass to keyboard and things get really noisy.