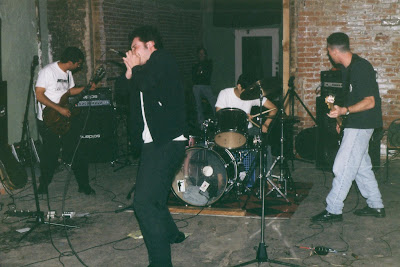 (Live at The Smell - Photo by Ackronomicon)
I first heard about Leopold on the Jesus Lizard newsgroup on AOL. I ended up trading a few emails with guitarist Eddie Rivas and he sent me a demo tape, which was basically this 7". When I found out they were playing a noise rock festival in San Pedro, I was there. They completely embodied where I was musically at the time - noisy, syncopated and angry. It was Unsane crossed with The Jesus Lizard. I was in heaven.

I kept in contact with Eddie and he knew about Twitch Party. At a show at The Smell, when it was still in North Hollywoood next door to Raven's Playhouse, he and Dave Miranda, the bass player, told me they had a new song and they asked me if I'd improvise lyrics. I obliged and soon afterward was asked to join the band as vocalist. It was a dream come true.

Now I was going to band practice in Downtown LA twice a week and playing shows two to three times a month, which was quite a change from Twitch Party. For the first time, I was performing to crowds. 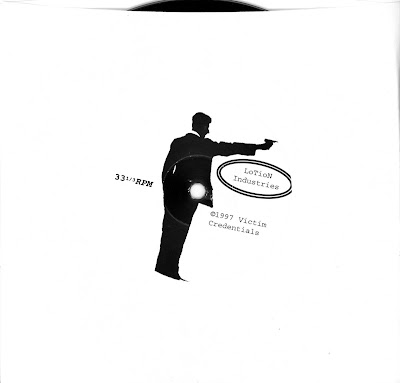 My first official show with Leopold was in San Diego at some strange place called Che Cafe. I remember Dave being impressed with my performance there.

Eddie was the ringleader and, I suppose, still is. He was/is the master of atonal, trebly unison bends and he played a Travis Bean. We ended up clashing, which was a shame, because he's a good guy and he definitely had his shit together way more than I did. Come to think of it, that's probably why we clashed.

George Tseng was one of the most amazing drummers I've ever seen in my life. We got along at first, but soon our music geekness got in the way and we weren't liking each other very much.

I was most in tune with Dave. For some reason, his personality and mine really clicked and he was always there for me until the end. 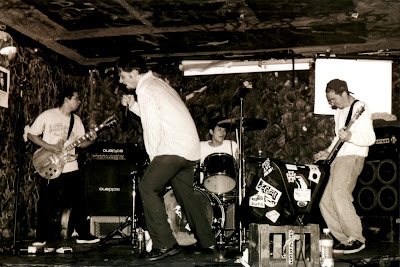 (Live at Al's Bar - Photo by Ackronomicon)
We played some great shows with bands I loved, like Babyland, Sleestak, 400 Blows and Melt Banana. After we opened for The Murder City Devils at Al's Bar, their singer, Spencer, came up to me to tell me I did a really good job. It was everything I ever wanted from a band.

Then our personalities started to clash. And, as to be expected, my narcotic intake fueled the fire. It really started with disagreements about my lyrics. They had been an established band for a couple of years before I joined and they had an image that they wanted to portray and here I was contradicting it. But I was 19/20 and I didn't want to be anybody's mouthpiece. Pretty soon, I was wearing vinyl pants to shows just to annoy Eddie. And then I missed a show because I overdosed on speed. Bad news.

Things got really tense. I got into Iggy Pop's The Idiot and realized there were different avenues musically that I wanted to pursue. The yelling and screaming was getting tiresome, as were the disagreements. Finally, I bailed at just the wrong moment. Dreamworks was going to flim a scene at Al's Bar and was looking for a band. Toast, the booker, recommended Leopold, but we needed professional pics. I didn't want to do it. I was in the midst of moving, Dreamworks turned my stomach, blah-blah-blah. The truth was, my heart just wasn't in it anymore. I wanted out and I quit. It was an asshole thing to do, but it was honest.

I eventually got back in touch with Eddie and we've been friendly since. I even did guest vocals at a show at Mr. T's Bowl for his birthday a year or two after we fell out. Afterward, a drunken Indio grabbed me and yelled at me all night that I should still be in the band. He was probably right.

I had nothing to do with this EP - it was recorded before I joined - but I performed these songs when I was in the band. I even made up lyrics for the instrumental, "When Cousins Marry."

The images and music were uploaded with Eddie Rivas' full consent. Thank you, Eddie! 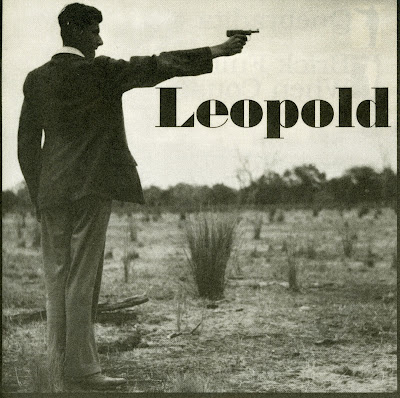 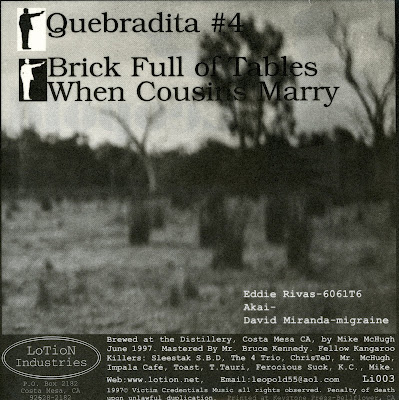 Visit Leopold on MySpace and buy The Wreck of Hope CD!