Goatfish - The End of a Fortnight 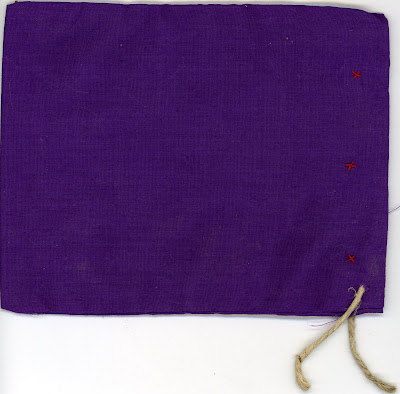 After the deng tape, I decided to launch my solo noise project, Goatfish, with this tape. This was actually the third release on MPAE - Squeakquencer's Aerobics for Dead People was second.

Unfortunately, The End of a Fortnight doesn't hold up as well as Spasmodic Goat. Most of the tracks lack focus and end up as chaotic free-for-alls.

All 50 tapes came in the above purple sack, which was hand-sewn by Hellicine, the artist who drew the cover.

I've since continued Goatfish as Ghoatefische, with a much more focused, controlled approach. 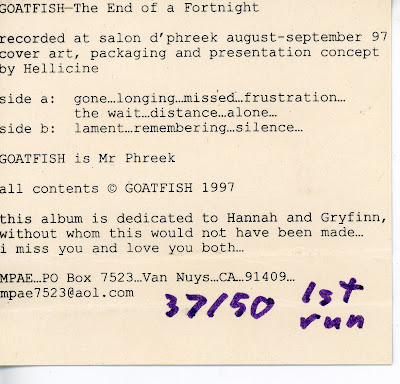 01. Gone - Probably the first solo noise track I ever recorded. Too bad I can't remember anything about it.

02. Longing - Four tracks of a power drill through various effects. I think the idea was better than the result.

05. The Wait - A quieter track that didn't turn out so badly.

07. Alone - Definitely one of my favorites. This is much more the direction I've headed with Ghoatefische.

08. Lament - My favorite track on the tape. I found samples of goats bleating online, mic-ed my computer's speakers into my four-track and added effects. The result is quite unnerving.

09. Remembering - Way too long track of my guitar feeding back over rumbles from my newly bought bass. I really should have watched the time here.

10. Silence - Another favorite track that shows the more controlled, focused direction I would go. 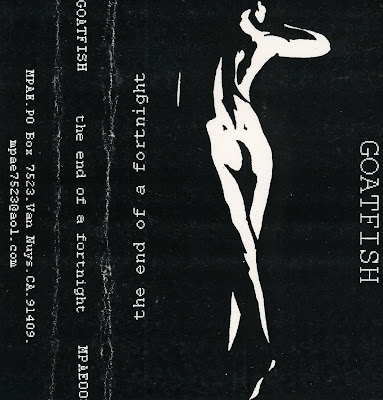 
Buy The End of a Fortnight on Bandcamp!
Posted by Mr Phreek at 4:16 PM